Seriously. I forgot this was here for a while. It’s ok now, I think. I’m here. It’ll be alright now.

Life? Life’s been ok. Thanks for asking. Since my last update I believe I’ve gone back to that KFC once, maybe twice. It’s been a while. Both times were reasonable experiences but not up to the standard of the first one. I haven’t had much to eat today so far and mentioning the dirty bird is making my stomach grumble. Let’s move on, shall we?

Tonight we’re going to see the Dead Kennedys for our second time. It should be fun. Last time was a few years back at the Manning Bar and we both really enjoyed it. Not sure what to expect this time around but if it sounds as good as the previous gig we’re in for a treat. The major dilemma I have is deciding whether to drive in and not drink or get drunk and train in. I better check the set times.

One big news item in the gap between posts I suppose is that Marika’s sister got married. We spent 3 weeks back in the isamaa and managed to catch up with shitloads of people, really, before and after the wedding. Even during the wedding actually, as they used the same photographer that we did. Small world, small country.

The other big news is that we bought into a nifty little bar. Yep, Marika and I are publicans. Well, partly. It’s in Estonia and we’re not, so we can’t get sloshed on our own supply unfortunately. Maybe that’s for the best. Anyway. Cool, right? Yes. It’s only relatively new but already popular. Now we just need to take over the world.

It also means we should probably get a real accountant. I even started dabbling in the stock market, although I don’t really intend to invest much. It’s just a curiosity at this stage. Accountants sort all that shit out for you. I think. The website says they do.

Honourable mention: both Marika and I are able to do proper pull ups now. We’re strong enough now that any risk of injury is more likely to be from the bar falling out of the door frame than of us dislocating our arms from their sockets. 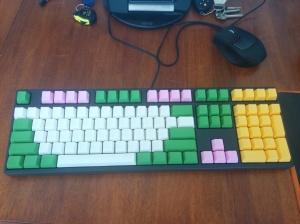 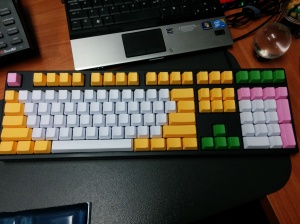 On a whim I pissed away a respectable chunk of change on getting some blank keycaps for both of my Duckys. Now I have a colourful yet indecipherable range of input devices to the amazement of all.

Yes, mixed and matched. Sorry if the aesthetic offends anyone.

Apart from these kinds of distractions I don’t really have a lot going on. Both of us are working and I for one don’t have any holidays left. Marika still has a million because she gets spoilt by her company. I’m still jealous.

Maybe I’ll tell you how the concert went next time.

2 thoughts on “Pardon me, dear. I kind of forgot about you.”